You are here: Home1 / The Translator 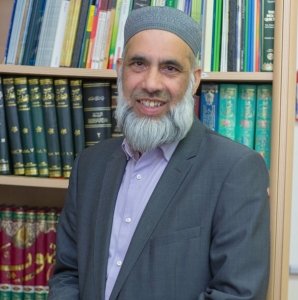 Born in 1958, he came to Britain from Pakistan in 1966 with his parents to the town of Halifax, where he memorised the glorious Quran, learnt Tajweed and basic Quranic Arabic. After completing a degree in Biochemistry at Aston University, he went on to gain a Science doctorate. He worked as a Scientist until 1990 and then decided to dedicate himself to serving the Muslim community. He read Islamic studies at a seminary in Pakistan under the guidance of Justice Pir Muhammad Karam Shah and then at Al-Azhar University, Cairo.

In 1995, Dr Musharraf helped to establish ‘Jamia al Karam’ Muslim boarding school for boys in Retford, where he was the headteacher for 3 years. In 1997, he was appointed director of the Karimia Institute. He began working on a number of projects ranging from community development to raising educational achievements of Pakistani children to adult classes and interfaith work. Currently Karimia Institute runs some 20 projects and is a premier Muslim organisation in the UK.

In September 2004, he made efforts to help the release of British hostage Ken Bigley in Iraq. Dr Musharraf and Dr Daud flew to Iraq, where they appealed to the captors to release Mr Bigley. This was an important symbolic gesture to show that British Muslims care for their fellow Britons, this was widely hailed as an important symbol of British Muslims loyalty and love of their country.

In 2005, Dr Musharraf was awarded an honorary doctorate by Staffordshire University, for his services to the British Muslim community.

In 2006, he was asked by the Prime Minister to chair the UK – Indonesian Islamic advisory group. The group’s remit was to ‘Advise on countering radicalism and promoting mutual understanding between Islam and West’. The group made several important recommendations; some of these have been implemented whilst others are still in the planning stage.

In 2009, he was awarded an OBE for his services to community relations in Britain. He is the former chair of the Christian Muslim Forum, a senior trustee of Muslim Hands, trustee of National Centre for Citizenship and Law. Formerly, he was the director of Postgraduate Course in Education, and Vice-chair of Association of Muslim Schools.

Interfaith experience
For the past twelve years his passion and experience of interfaith is clearly portrayed in the following excerpt: “I have worked tirelessly promoting interfaith work both at a local and national level. I have been at the front line developing grass roots interfaith work. I started this journey with my local Anglican Vicar, URC minister and Roman Catholic Church. We established a local interfaith body (Faiths in Action) and worked with the Nottinghamshire Interfaith Council. I believe we have had a visible impact on local communities. In January 2006, I joined the Management Committee of the national Christian Muslim Forum. In 2008, I was appointed the Chair of the Forum and have successfully organised five residential conferences for Imams and Christian Ministers. These conferences have developed the leadership potential of more than two hundred Christian and Muslim leaders to weave stronger relationships and promote interfaith in their communities”.

Integration and social harmony
Dr Musharraf has a passion for working with people and developing communities. Four decades of working with people from different backgrounds has provided wonderful opportunities for mutual learning, enabling him to serve local communities. This work has not been without its challenges and has led to many tense exchange of perspectives. However this is an enriching process vital to creating a plural, socially harmonious and cohesive society. Over the past five decades Muslims have achieved a great deal in terms of equality, rights of ethnic minorities and social justice but there is much more to be done. We are entering an era of enormous challenges; globalisation, climate change, disenfranchised communities and unacceptable levels of global extreme poverty. He remains optimistic that to build stronger communities, can make a contribution to these local and global challenges.

More inter and intra faith work will help community cohesion
Interaction and dialogue between faith communities leads to better understanding of one another and removes misunderstandings. The opportunity to meet and share stories brings people closer and should not be confined to a few, it must become a grass root activity, only then will it impact community cohesion.

Sadly there is extremism of one kind or another in all communities; anti-Semitism, far right Xenophobia and Islamophobia. Therefore, all faith communities must make extra efforts to tackle extremism within their members. One way of doing this may be to support faith groups to carry out more intra-faith work. As some of these communities have serious rifts amongst themselves. This is particularly true with Muslims who are very diverse and culturally different. This internal healing, this intra-faith unity can help groups embrace diversity, thus reducing extremism.

Scholarly work and publications:
1. Aqaid an Nasfi: A translation of the orthodox creed written in 11th century
2. The perfect Prayer: This is a manual with details of the most important ritual of prayer according to the Hanafi fiqh.
3. The blessings Ramadan: Describes the virtues, benefits and philosophy of fasting as well as fiqh issues.
4. Pearls of Wisdom: A collection of forty Ahadith on the means of personal development, love, marriage and parents.
5. Time to Marry: Purpose, how and when of this great institution, are explored from Islamic as well as modern viewpoint.
6. Journey to Allah: Translation of manual by Hafiz Abdul Karim on self-purification and spiritual development
7. Shortening of long hopes: A translation of Ahadith collection by Ibn Abi Dunya on detaching oneself from the love of the world.
8. Hajj: Journey of a lifetime: A manual containing details of fiqh and how to perform hajj, with maps, diagrams and indispensable health guidelines.
9. Dua & Salah made simple:  Prayers that everyone must know.
10. Learning to read Quran made simple: An Arabic reader in 2 parts.
11. Beliefs and religions: Islam: Published by Thornes Nelson. An Introduction to Islamic teachings for British secondary schools
12. Seven Steps to Moral Living: Published by Kube Publishers. A guide for character building and developing self-discipline
13. Selected Questions & Answers from Fatawa Rizwiyya
14. 7 steps to moral intelligence: A collection of more than a hundred questions and answers on the subject of cleanliness. Also how to develop understanding of right and wrong and skills for interpersonal relationships that leads to character building
15. Introduction to five pillars of Islam
16. Tokens of Wisdom

People and Places Series:
This is a series of booklets available free of charge from the Invitation publications:
1. Isra wal Miraj: Explains the context purpose and meaning of the wonderful night journey.
2. The Tragedy of Karbala: Outlines the brief history of the battle of Karbala and its consequences. A tribute to the Prophet’s family.
3. Celebrations of the Prophet’s Birthday: Polemical discussion of the virtues of celebrating the birth of the Greatest Prophet of God.
4. Maulana Ahmed Raza Khan Brailvi: Introduction to life works of one of the greatest scholars of the twentieth century.
5. Excellence of Friday prayer and the language of sermon
6. Excellence of salah