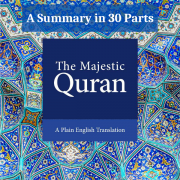 Reading The Majestic Quran means different things to different people. From childhood we have been conditioned to tilawat, the recitation of the Quran for the sake of sawab, Divine reward; that’s great, but let me add that you should read the English translation too, study the Quran with your mind and experience the life-changing message of Allah’s book. It will improve your spiritual health, your character and bring you closer to family and friends. The reading of the Quran in English will give you spiritual energy and boost your physical, psychological and spiritual well-being. Here is your daily Quran reading plan during Ramadhan:

Take up the feel-good challenge: Read the majestic Quran every day
This summary of each Juz can be read in less than 10 minutes. By setting the goal of reading the whole of the Quran this Ramadhan for yourself, you will get encouragement to learn and understand and achieve satisfaction at the end. Without learning new things, you cannot grow. So, start today by reading the Majestic Quran, and with Allah’s help work towards it every day.

Put aside 10 minutes daily for the English reading of this summary. Then ask yourself: what is the Quran saying to me? How can I live according to this teaching? How will I monitor my progress? Do this for the whole Ramadhan.

The recitation of the Quran during Ramadhan is Sunnah of beloved Messenger
One night during the month of Ramaḍan, the Prophet, stayed in the masjid after the ʿishā’ prayer and performed additional ṣalāh. Some ṣaḥābah (companions) joined him. The next night he did the same accompanied by more ṣaḥābah and the third night saw an even greater number. However, on the fourth night he left the masjid immediately after praying the farḍ prayer. The next night he did the same when asked about this he said, “I don’t want to burden my followers.” He told the Sahaba, “I read the whole of the Quran in Ramadhan with Jibreel”. It was this Sunnah that prompted the early Muslims to adopt the practice of reading the complete Quran in the month of Ramadhan. To facilitate this the Quran was divided into 30 equal parts. Each part is called Juz (Plural Ajza).

When ʿUmar, may Allāh be pleased with him, became khalīfah, he saw large numbers of people staying behind after ʿishā’, praying individually. After consulting scholarly ṣahābah, he established the tarāwīḥ prayer as a regular congregational prayer during Ramaḍan. He instructed that it should be lead by a competent ḥāfiẓ (person who has memorised the Qur’ān), and a Juz of the Quran should be read each night. So everyone would be able to listen to the entire Quran at least once a year.

The congregational Tarāwīḥ is now performed as 20 rakʿahs of ṣalāh, performed two units at a time with a rest period between every four rakʿahs, which was originally used for making ṭawāf (circumambulation) of the Kaʿbah in Makkah and performance dhikr in Madinah. Some masjids organise speakers for these times, while others perform a group dūʿā’.