You are here: Home1 / Features

HAVE YOU ORDERED YOUR COPY OF THE MAJESTIC QURAN?

A new translation of the Quran

I have undertaken this translation because I owe so much to the Quran; it has given me meaning and a purpose in life. I feel indebted; this translation is a labour of love. Perhaps you also feel the same. I believe that my translation will offer fresh insights and understanding for readers living in a global village in an exciting age of Science and Information Technology.

The purpose of this translation is to convey the meanings of the Majestic Quran clearly and concisely with the necessary impact and the appropriate tone of voice. I simply want to make it accessible, readable and an appealing translation in plain English.

I have been a student of the Majestic Quran for more than 50 years, during this time I have memorised the Quran, studied the Arabic language, the Science of Tafsir and Hadith at Al Azhar University, Cairo. Prior to this, I was a Research Scientist for more than 10 years.

The six outstanding features of this translation are explained below:

A special feature of this translation is that I have added section headings for the sake of clarity. These headings correspond to major themes and subject matter presented in the text. The headings of each section are not just attention-grabbing but reflect its contents, themes and specific topics that will help the reader to understand the ‘bursts of revelation’, the Quran was revealed according to the need of the time. However, this is only an attempt at clarity for the sake of understanding the divine text.

The headings are not there to dictate the interpretation of these verses, although they may guide towards a particular interpretation, they are a means of joining together ideas in the sections, helping to contextualise the passages. This allows the Quran to speak for itself. I believe this is a very powerful way that allows the reader to have a true taste of the Quran, to see and to read Allah’s message.

The surah’s of the Quran can be divided into sections based on the subject at various places or the seams, they act as hinge passages, which are separate units that can be attached to the preceding or following narrative block. These narrative blocks can be very fluid, particularly the hinge passages that act as buffer zones, which allowed the previous passage to merge into the next.

My goal has been to translate the meaning of the divine message by being faithful and accurate in expressing the exact meaning of the Quranic words, by using the root meanings of the words rather than freer interpretation. I have used plain English, simple words and avoided archaic words. Instead of translating Arabic idioms I have used English idioms.

I have aimed for an accurate translation by relying on classical Arabic dictionaries and commentaries of the Quran. My task has been made easier by eminent teachers, the previous prominent translators and the illustrious commentators. How successful I have been in providing a meaning that is clear, plain and contemporary is for the reader to judge.

The introductionof Surahs highlight the period of revelation, the merits of reciting the Surah, the major themes and the intra-and inter-surah coherence. An introduction to each Surah also sheds light on the socio-economic, political, historical and cultural environment of seventh century Makkah/Medina in particular and the Arabian peninsula in general at the time of revelation. 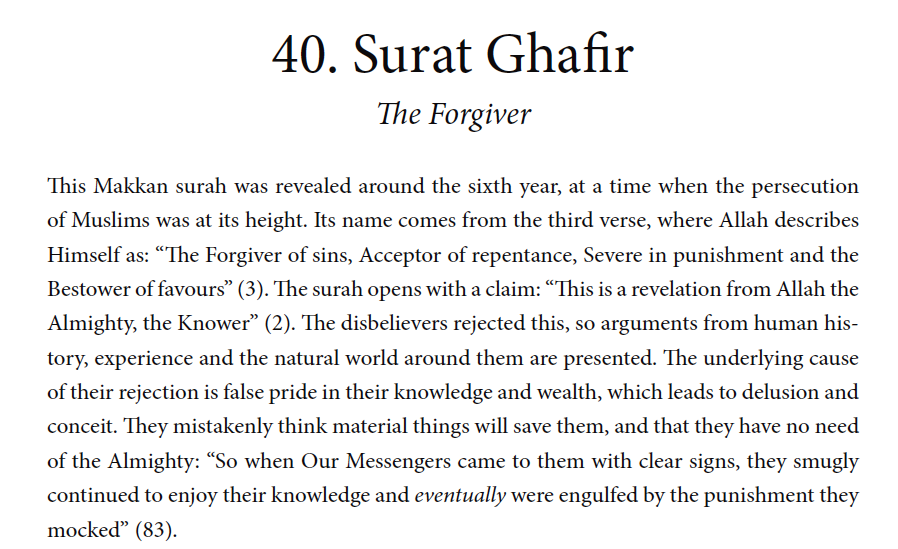 I have used footnotes to add value to the communicative process of translation, their absence could lead to misunderstandings, I have used them for; explaining metaphors, the figurative language of Quran, circumstances of revelation can help to understand the background and the context of events.

This heading in the margin of the Arabic page is there to encourage the reader to reflect on Quranic teachings; think deeply about the section or a verse; contemplate on its meanings, using reason, emotion and spiritual insights. Intense focus is going on, this is a great spiritual activity, worship closeness to the Lord. Its purpose is to gain inspiration from the Quranic reading. The Messenger (peace be upon him) said: “a moment’s reflection is better than 60 years of worship.” This makes the Quran reader more certain of the revelation, they will experience the revelation, as one focuses on single-point whether an object or an idea. 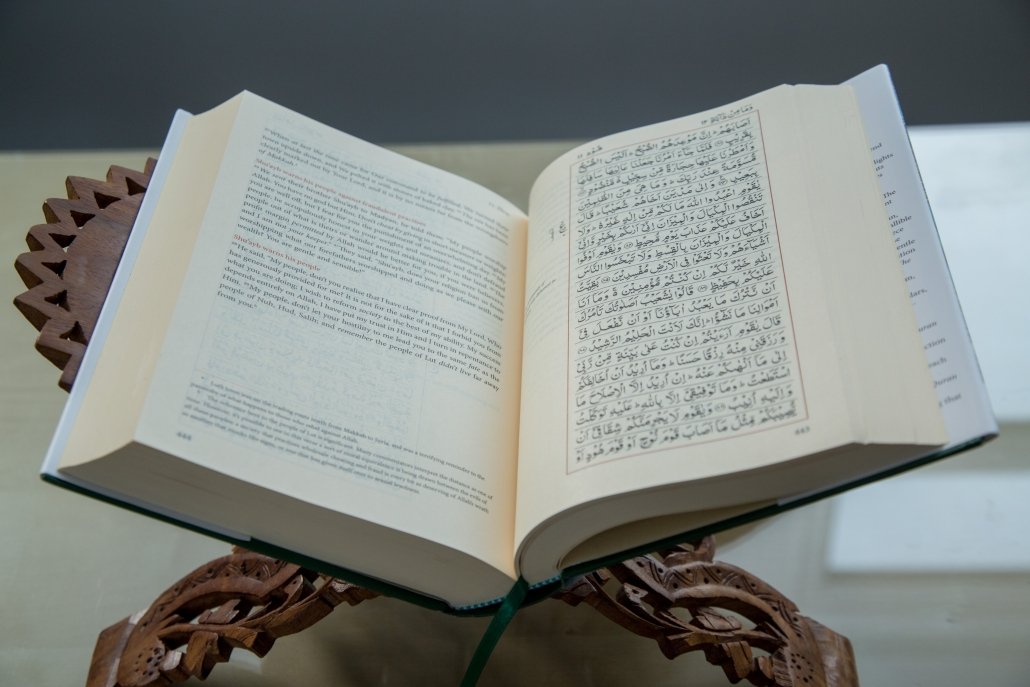